An Audience With Queen Elizabeth I

"The two Queens communicated in Latin as it was their only common language: Granuaile spoke Irish and Elizabeth spoke English". 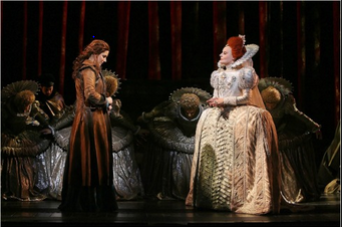 A Meeting of Two Queens 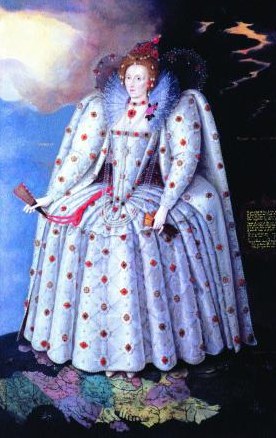 An Illustration of Queen Elizabeth I
Gráinne, having lost everything, appealed directly to Elizabeth. Her initial petition, dated 1593, pleads age and poverty, and pledges ‘to envade with sword and fire all your highness enemyes’. She requested ‘some reasonable maintenance’ and the return of seized property in exchange for total allegiance. While the petition was en route to London, the earl of Tyrone was secretly acting to begin a rebellion against the Crown. Tibbot-na-Long was implicated, imprisoned and charged with treason.
Fearing that Tibbot would be ‘executed before . . . justly tried’, Gráinne gambled on a personal appeal and sailed for London. She is known to have been at court from June to September, during which time she replied to Lord Treasurer Burghley’s eighteen ‘Articles of Interrogatory’. She explained how circumstances compelled her to seek a living from the sea, and how, following Owen’s murder, Richard Bingham had ‘wiled her to remove from her late dwelling in Borisowle and to come and dwell under him’. During her journey she was seized and bound by John Bingham, and all her property confiscated. Released on the Devil’s Hook’s pledge, ‘fear compelled her to fly’ when he rebelled. She insisted that since Perrot’s pardon she had lived a farmer’s life and ‘utterly did she give over her former trade’.

Bingham was outraged. He wrote to the court, stating that he had enough evidence, since her pardon, to justly hang her. Despite Bingham’s protests, Elizabeth agreed to hear Gráinne’s petition and have her claim investigated. The only charge actually laid against her was her chastisement of Murrough-na-Moar; the rest of her activities were dismissed as she ‘hath at times lived out of order’. Elizabeth recommended the release of Tibbot-na-Long and that monies be diverted from taxes on her sons’ estates to provide a pension for Gráinne. Bingham was ordered to ‘protect them to live in peace and enjoy their livelihoods’. Elizabeth remained confident that Gráinne ‘as long as she lives, [will] continue a dutiful subject’.
Bingham proved reluctant to comply with his monarch’s wishes. Realising that his adversary had been granted leave to return to sea without having to provide sureties or hostages for good behaviour, he ordered troops to accompany her and stationed a detachment on her lands, obliging her to feed them. On the brink of poverty, Gráinne again appealed to Elizabeth. In 1595 she sailed for London, where she requested to be allowed to ‘lyve secure of my life’. A commission was appointed to investigate her claims. Bingham, fearing new charges which had been laid against him, fled to England and was imprisoned.
In December 1595 Tyrone’s ally, Red Hugh O’Donnell, installed his own candidate as the MacWilliam, took hostages and repeatedly plundered Mayo. He specifically sent O’Doherty to attack Gráinne. Once again, Gráinne set about rebuilding in the only way she knew. The Bourkes concluded that they had only two choices, to support Elizabeth or O’Donnell. In 1597 Tibbot-na-Long reached an advantageous accommodation with the Crown. Bingham’s successor, Sir Conyers Clifford, recorded a payment of £200 to Tibbot ,‘his mother and [half] brother’ for their services.
Proudly powered by Weebly